Last verdicts here are the Italian champions: Tumbarello Under 30, Lastri in RC4, Scarioni Bis in the women's category 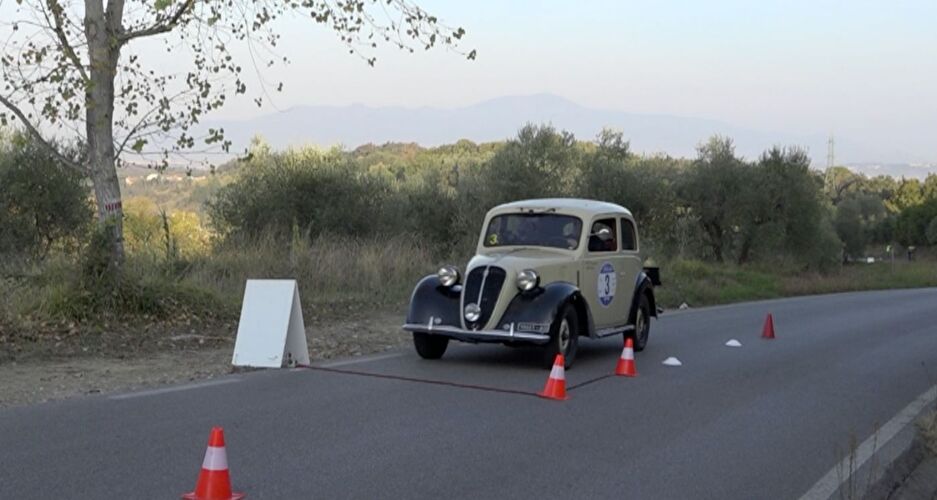 Sixty-five crews were at the start of the last round of the Italian Historic Car Regularity Championship.
The 2021 edition of the Coppa d'Era, a race organised by Altitude Eventi, had as its headquarters the town of Pontedera, where scrutineering took place and an original convivial moment strongly desired by the organiser Riccardo Rosi on Friday evening, with a dinner organised inside the Piaggio Museum.

Participants competed in 65 timed tests along a 220 km route through the Val d'Era, Val di Cecina and Val d'Elsa.

Roberto and Mario Crugnola from Varese, in a 1937 Fiat 508, won the twelfth round of the Cireas 2021 after a head-to-head with Classic Team's Sergio Sisti and Anna Gualandi in a 1937 Lancia Aprilia.
Third step on the podium for the Kinzica crew composed of Claudio Lastri and Valter Pantani in a 1975 Alfa Romeo Giulia.

Among the teams, victory for the new Italian champions of Scuderia Nettuno, ahead of Scuderia Kinzica and Scuderia del Grifone.

Excellent performance for Roberto Paradisi who gets the fourth place overall and wins the Under 30 classification with his 1980 Fiat 127. Behind the driver of the Castellotti Team, Alfonso and Rocco Tumbarello on Autobianchi A112 of 1982, who won the Italian Junior title. Michele Bellini and Angelo Caniggia on Porsche 911T 1968 Brescia Corse close the podium.

Another of the verdicts expected in that of Pontedera was related to the Women's classification. Thanks to the victory at the Coppa d'Era Gabriella Scarioni and Ornella Pietropaolo are confirmed as Italian champions on board the tireless Austin Mini HLE of 1982.
Behind them came Federica Bignetti and Luisa Ciatti in the customary 1960 Alfa Romeo Giulia Spider of the Club Motori Storici Lumezzane.
Third step of the podium for the 1975 Autobianchi A112 Abarth of Emanuela Cinelli and Giulia Rampini, competing in the colours of Brescia Corse.

Exciting, as always, the challenges for the conquest of the categories.
In RC2, behind Crugnola and Sisti, Stefano Valente and Alberto Aliverti finished on the podium in the much admired 1935 Fiat 508 S Balilla Berlinetta.

Michele Bellini and Angelo Caniggia on Porsche 911T of 1968 Brescia Corse close at the first place in RC3.
Second place in their category for Giovanni Pighi and Luigi Callegari on a 1968 Morris Mini Cooper S.
Behind the GMT bearers, at only 6 penalties, is Massimo Cecchi navigated by Emma Graziani on Innocenti Mini Cooper 1966.

The RC4 category saw the victory of Claudio Lastri and Valter Pantani on an Alfa Romeo Giulia Super of 1975, who preceded by only two hundredths Roberto and Andrea Paradisi on a Fiat 127 of 1980.
Third place in the category for the Classic Team crew formed by Salvatore Cusumano and Virginia Bonsignore and their 1974 Autobianchi A112 Abarth.
With this result Lastri and Pantani become Italian champions in their category.

Also in RC5 are two hundredths of a second that divide the winners Alfonso and Rocco Tumbarello on their 1982 Autobianchi A112 from the second classified, teammates Giovanni Gualtieri and Alessio Morosi on a twin car.
Behind the two crews of Scuderia Nettuno, Roberto Boracco and Angela Bossi from Varese, on A112 Abarth 1982, close the podium. Translated with www.DeepL.com/Translator (free version)