The Peugeot crew precedes Giacoppo - Randon and extends its lead in the Regolarità Sport Pro Energy Cup with only Valpantena to go. 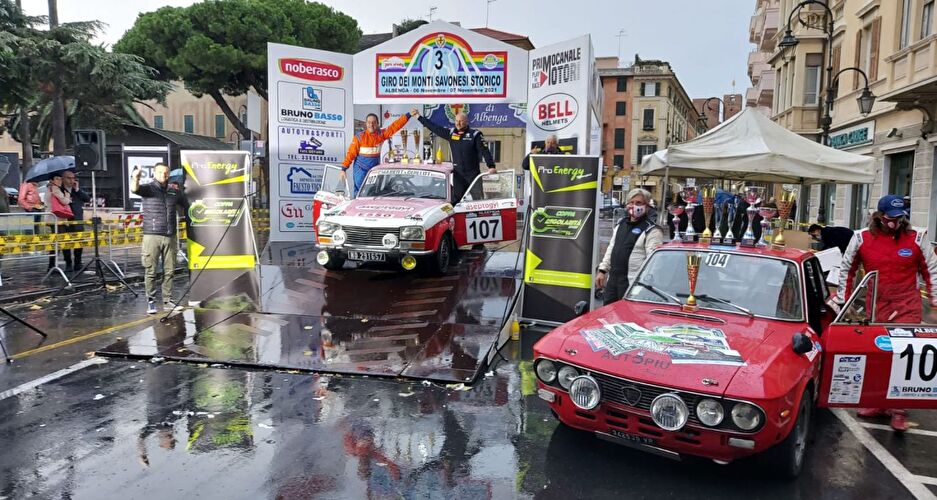 The 3rd regularity sport Infinity, penultimate race of the Sport Regularity Pro Energy Cup saw the victory of Luca Monti on Peugeot 304 in the second group ahead of Andrea Giacoppo on Lancia Fulvia Hf in the fifth group. There is still one race left, the 19th Revival Rally Club Valpantena of next 12-13 November for the assignment of the cup.  Bearing in mind the expected scores, the above mentioned drivers are still in contention for the final victory of the Regolarità Sport Pro Energy Cup. In the next few days, the updated classifications will be published on the website www.proenergymotorsport.it and everyone will be able to make their own calculations.  The Ligurian race proved to be challenging even for the best drivers, because instead of the usual pressure switch at the end of the stage, the organizers decided to use photocells, then indicating on the asphalt a white line to indicate the point of detection.  The first stage determined the ranking as no one present expected such a detection.  Monti scored 8 penalties, Giacoppo, who is used to a slow passage, paid 104 penalties and Fiore, even 300.  In the following laps everyone adjusted their "eye" better and some better results came out, but by then the difference in penalties was too much between Monti and Giacoppo, who also took the first two places overall.  "I don't use viewfinders and I pace fast," said Monti and at the first photocell, even though I was disoriented, I managed not to do too much damage.  Seeing the advantage accumulated from the beginning, I decided to pass on the following tests as if there was a pressure switch to detect the times, as we are moreover accustomed. I limited the damage. I have to say that I still haven't found the right balance with the Peugeot 304 and I always pay 8/10 cents in advance. At the Valpantena I will reuse the sights to see if they improve the results in the passages".  At the most important national regularity sport race, for the Coppa Regolarità Sport Pro Energy there are 9 drivers registered so the fight for the victory is getting wider. In addition to the two specialists Monti and Giacoppo, Mauro Argenti with the Fiat Ritmo 125 Tc is back in the race. There will be a great fight among the other protagonists, starting with Giampietro Ceschi, fourth in the Regolarità Sport Pro Energy cup, and Alessandro Zanini, who is ahead of him, who will try to get ahead of him to win the third step of the final podium of the 2021 Cup.  With them also to report the others present:  Alberti Simone, Cappello Carmelo, Melotti Guerrino, Sartoris Davidee and the lone navigator Cristian Adami, who took home the Verona Regolarità Sport Pro Energy Cup.

--> HERE YOU CAN SEE ALL THE UPDATED RANKINGS