Gandino and Merenda, third, celebrating victory in the Italian Championship 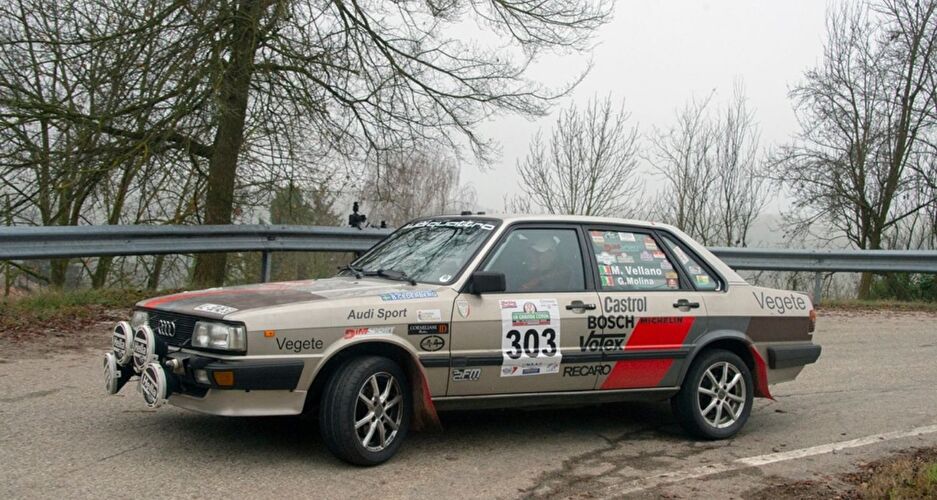 Fought and exciting the two regularity events that took place in conjunction with the historic rally La Grande Corsa, and that have largely respected the predictions of the eve both in the sport, as in the medium one that awarded the Italian Championship.

MEDIA RALLY - Last act of the Italian Championship, the second edition of La Grande Corsa a media, counted at the start all the major exponents of this particular discipline, two of which were playing for the overall victory. Things got complicated since the first two stages for Giugni and Biagi on Renault Alpine A110 that slipped away from the top ten, giving the farewell to the hopes of sewing the Tricolour; this facilitated the other pretenders, Gandino and Merenda on Fiat Ritmo 130 TC, which still maintain the right concentration remaining close to the first ones. Chiesa - Chiesa with the Ford Cortina Lotus start very well, but in the third stage they slip in the back. The head of the race is so taken by the Audi 80 of Vellano and Molina who defend it until the finish line winning for the second time La Grande Corsa, after the success of 2019; Marcattilj and Giammarino are second with the Porsche 911 detached by 10 penalties and the podium is completed by the new Italian Champions Gandino and Merenda who close with 20 lengths of detachment from the winners. Fourth position for the Lancia Delta of Concari and Androvandi and, completing the top five, is the Alfa Romeo Giulietta of Bonnet and Solomatina. Twenty-seven crews finished the race, with only one forced to retire.

SPORT REGULARITY - Valid as the last round of the Trofeo Tre Regioni, the race started in the sign of the Lancia Fulvia of Aghem and Cumino that after the first four surveys were travelling with only two penalties, but the next two made them lose the lead of the classification, promptly taken by Giacoppo and Randon with the Lancia Fulvia HF that at mid-race lead by 17 lengths on Fiore and Garelli also in race with a Fulvia HF and 18 on the Volvo 144 of Fabbri and Sartore who in the second lap launch the attack to the provisional leaders; taking advantage also of a not perfect passage of Giacoppo that costs him 23 penalties, the bearer of the M. I.T.E. Project passes to the first position. I.T.E. driver took the lead and in the last race he consolidated his advantage bringing it to a reassuring 10 points that are worth the victory. Randon and Giacoppo finished second, however satisfied with their race, and the podium was completed by the Fiat 131 Racing of Barbotto and Giachino; for the fourth position we had to resort to the discriminating factor since Aghem - Cumino and Viganò - Giacobino (Fiat 850 Sport) finished with the same penalties, but the Fulvia duo, having been more precise in the first stage, won the fourth one. Twenty-one of the twenty-five crews who started crossed the finish line regularly, demonstrating a particular liking for the double pressure switch in each test that doubled the number of detections to the hundredth of a second.